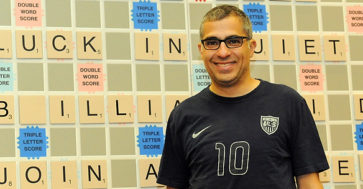 “Way of the Puck lovingly captures the rituals, lore and joy of this nebbishy, throwback American subculture. And it does so because director Eric Anderson resists the temptation to condescend to air hockey’s band of quirky devotees. As a subculture geek myself, respect matters. Praise the table!”

Quality Review at Curled Up With A Good DVD!

If you’re anything like me, you play air hockey poorly, fumbling the puck and shooting it into my own goal. The players featured in Way of the Puck have the skills to put me to shame (better than even I can myself), and they all share a rabid love of the game.

Many of them have been playing since air hockey hit the scene back in the ’70s. They shun holding the rounded handle that juts from the top of a traditional air hockey mallet, opting instead for a three-fingered grip on the mallet that gives them more control.

Director Eric D. Anderson, himself a competitor, traces the history of the game and details the lives of several players who compete in national championships. Mark Robbins (“The Guru”) is an encyclopedia of knowledge, and his garage holds a fortune in equipment and treasures (including a virgin table, mint in box). Tim Weissman (“The Ex-Champ”) is credited with creating the circle drift and with bringing thought and strategy to the game. Andy Yevish (“The Promoter”) is an artist whose wife is not exactly thrilled with all the time Andy spends promoting, arranging and playing the sport.

Way of the Puck calls to mind King of Kong: A Fistful of Quarters in how the players’ dedication is portrayed and how the tournaments are covered. Both films brought a true excitement to subjects that don’t set my soul on fire by their nature. It also reminds me of the clever documentary Welcome to Macintosh, mostly in the time spent on Mark Robbins – the trip through the stuff in his barn shares similarities with scenes in Welcome to Macintosh.

To take a subject like air hockey that has a, shall we say, less than massive following, to make it interesting and compelling enough to inspire its viewer to want to seek out that mostly ignored air hockey table at the local arcade and try out that three-finger grip is quite an accomplishment. I say well done.

Director Eric D. Anderson has documented a fast-paced, quirky sport; the unique individuals who are passionate about the sport; and its questionable future.

Eric D. Anderson, himself a one-time nationally rated air hockey player, puts his experience behind the camera to use in documenting the intense, little-lauded sport of air hockey in this, his first feature film. Like the sport itself, Anderson’s film is intense and offbeat, using antique stills and videos interspersed with stills and videos of the players in their younger days, some history of the sport including its NASA origins, and scenes of video arcades filled with aging mid-lifers pursuing their youthful dreams of success in a sport of their passion.

As arcades themselves begin disappearing, losing out to the burgeoning of computer and video games, these anachronistic advocates of a dying sport look at what is possible for the future of air hockey. Anderson’s film is always respectful of the sincerity of the air hockey advocates and the sport itself, yet spares none of the troubling aspects of the sport and its future.

Those who are invested in air hockey and its tournaments are a unique group of people, many with nicknames like The Wolf, The Juggernaut, and Egyptian Magician. There appears to be a small group of dedicated international players that love something of the incredibly quick reaction time of the sport, estimated at 1/600th of a second. Many have to buck negativity from spouses; others have full support and encouragement. One man reflects of the totality of his life against the fleeting victories of the sport he loves, trying to convince himself he has the better of the deal with his family behind him. Is air hockey a child’s game or a world-class sport?

Who is to decide? There are men in the inner circle of air hockey advocates that have spent their life promoting the sport, including guru Mark Robbins, who holds much of the history of the sport. When one young enthusiast is tossed aside by his girlfriend, he is told, “Air hockey still loves you.” For some, the diversion is a welcome relief from the difficulties of everyday life. There is no misery on the table: “Praise the table!” is the refrain. The profiles of the personalities involved in the sport is part of the delicious bits of this film that need to be savored.

One air hockey tournament offers a $14,000 prize, an all-time high for the sport. As men are seen taping their fingers for the next tournament, they reflect on their attitude towards the game. Two Venezuelans attend a tournament and are later discovered to have been using an upside down kitchen table to learn to play the game. Suddenly, the minority that is the air hockey corps reels from learning they are actually the privileged group in comparison with these enthusiasts.

The film flies us from their NASA origins to gaming in Japan to an air hockey expo on The Tennis Channel. One enthusiast discusses the need for a professional promoter to save the game; another is seen traveling from one tournament to another, investing everything in keeping the dream alive — even leasing the molds from a former distributor that has long since quit making pucks for the game. Perhaps Anderson’s film will do what others have failed to do and help regenerate interest and profitabililty in this short-lived sport. In any case, it is a fast-paced look at a piece of the culture of Americana grown global. Worth a look.

If you grew up in America between 1970 and probably the turn of the century, chances are you’ve played air hockey at least once. A staple at arcades around the country, air hockey was also once a very popular addition for any family basement or entertainment room. That familiarity is the basis for Way of the Puck a documentary by director Eric D. Anderson that chronicles the growth, decline and near decimation of the sport, and the story behind those that play it competitively. Yes, there is competitive air hockey.

Watching the film certainly evokes memories of The King of Kong, another documentary that focused on the zeal and passion of a group of competitors devoted to another so-called fringe hobby, video games. While there are some similarities, The Way of the Puck seems far more tragic. For the players in The King of Kong video games are merely part of who they are. They have families, jobs and are relatively successful outside of the arcade. Additionally, the video game industry is booming, even if arcades themselves are dying out; so the pursuit of gaming records doesn’t seem as fleeting.

In contrast, for the players in The Way of the Puck this is their life…. (click link for rest of article)