My Cousin’s Kid Interviews the Beast From the East 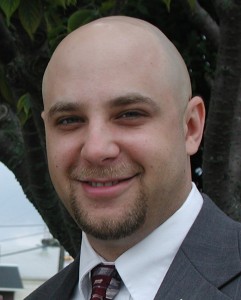 The Beast from the East

Two-time runner-up Andy Yevish was first discovered on the boardwalk of the Jersey shore, where as a lanky teen he beat former World Champion Robert Hernandez in an air hockey exhibition. Andy already had a reputation as an aggressive offensive player, and this shocking unofficial victory brought him into the fold of competitive play, where he immediately began finishing in the top five, including a 2nd place finish to air hockey wunderkind Tim Weissman in 1993.

Andy organized a couple of east coast tournaments in the early 90s, and took over the promotion of the World Championships in Las Vegas in the early 00s. As a player and as a promoter, he has been no stranger to controversy… but it is difficult to deny his formidable offensive attack, which remains one of the best in the game. Even so, Andy has been unable to translate his brilliant and powerful offense into a World Championship. At the age of 42 he is much older than the oldest air hockey champion in history and the question lingers: “Will he ever win one?”

Incredibly, my cousin’s 11-year-son, Henry, is still maintaining his high level of interest in the sport of air hockey. He asked if he could do one final interview, so I let him fire away on the self-proclaimed Beast From the East, Andy Yevish.

HENRY: The movie says that you have one of the best offenses of all time. Is that true? But Eric says that you play “all offense and no defense.”

ANDY: Hi Henry,   Yes…  I would say that the consensus is that I have one of the best offenses ever in air hockey. I have more shots, more variety, and more styles of play than most players. I can play both fast and slow, and can be deliberate, or fancy… But Eric is wrong if he says I play all offense and no defense.  I think most players who play me will tell you I also have one of the best defenses. I vary my defense to the player’s strengths. I change my weaknesses.  However, what Eric may be referring to is that one of the ways I play defense is what I call a “scoring defense” where the defense becomes offensive. I use my opponent’s taking themselves out of position by taking their own shot as an opportunity to hit a quick transition shot.  It is a gambling strategy, as it is high risk, but high reward.  I do not play that strategy all the time though. 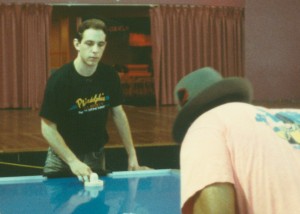 HENRY: What is your best craziest shot that other people don’t do? I want  to crush my friends at air hockey!

HENRY: In the future is air hockey going to die?

ANDY: Well, I don’t know the future, but I hope not.  There are plenty of people working hard to keep it alive. My best guess it that it should a least be able to maintain itself, but in order to get big, some major changes will need to be made. I think a television show designed to showcase ai hockey competition in a 30-minute format would be a good vehicle to get it noticed. From there, air hockey related equipment and clothing could be the thing that gives air-hockey eternal life. 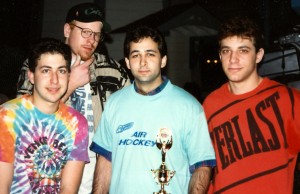 Andy and the innocent East Coast Crew, before Andy lost his shirt contract with Everlast. Product placement wasn’t so subtle back then, I see.

HENRY: The movie says you were a boxer. Is it fun to punch people in the face but not get in trouble?

HENRY: Do you train like Rocky the boxer before a big tournament? What  are the exercises to prepare the air hockey muscles? 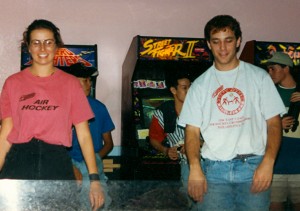 Kara Klyn and the welterweight Beast From the East, back in the day.

ANDY: It used to be well known that I used to physically train before tournaments, and not drink, smoke, and abstained from women. That was before I got married, and older and I was only in good shape if you consider “round” a good shape.  Recently I have gotten in better shape than I have been in 10 years (not how I look in the movie). I never trained for air hockey in particular, but I had back problems, so I trained in order to have the endurance to play my best without pain.  My workout regimen now (which I do all year) is I bike 10 miles a day, do a 20 minute ab routine (which keeps the weight off and strengthens the muscles to keep my back from hurting), I do about 120 pushups a day (4 sets averaging 30 each set with vared arm placement… but more reps in the earlier sets). Then I hit weights 3 times a week (about every 2-3 days.. I do 4 sets of 15 reps with 25lb dumbbells of each of the following exercises-  bicep curl, tricep press, military press, and chest flys.  When I do get a chance to get to the gym, I do some other exercises, like bench pressing and butterflies but with my lifestyle it’s hard for me to get there.  I will soon be adding squats to the routine on off-days. 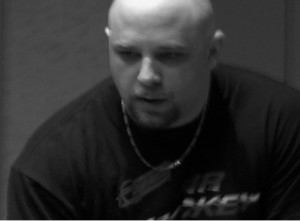 HENRY: Do you have a secret grip?

ANDY: I don’t have any grip that is a secret. I actually vary my grips on the mallet, depending on the action I want to get on the puck.  As a general rule, a tighter grip will get you more arm power, and a quicker release.  A looser grip will let the mallet do more of the work (especially when you hit it with follow-through) and get more action (like slice) on the puck.

HENRY: My dad wants me to ask is the Jersey shore really like on that TV show?

Andy Yevish is a portrait artist and entrepreneur who splits his time between Wildwood, New Jersey — where he owns two stores on the boardwalk (Fame and Superstars) — and Sherman, Connecticut, where he enjoys a more rustic existence with his air hockey averse wife, Anna.

← Danny Hynes ist achtfacher Weltmeister!
→ Philosopher Lou Marinoff Weighs In On the Importance of Air Hockey in Our Society