By: The ManagementCategories: Interview, Uncategorized 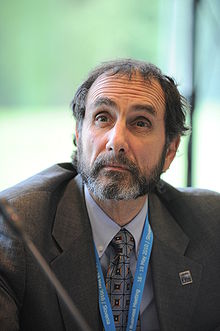 Like many fringe sports, air hockey is an activity that inspires profound existential questions in those who love it. Nostalgic documentaries like Ken Burns’ latest effort seem like easy, non-threatening missions — we love baseball, it is our national pastime, and we also love our love of baseball, which usually harkens back to an earlier time in life, when we were more innocent, when players were drug-free (well, just a different kind of drug — speed, perhaps), when these athletes were real role models, heroes even.

What’s harder is placing air hockey (or darts, or shuffleboard, or baseball card collecting) in a similar context. There is no assumed national love for these activities. The same passion that is celebrated in Ken Burns’ beloved Baseball or Tenth Inning is called into question when looking at air hockey. But should we not celebrate passion for passions sake? How obviously worthy is hitting a ball with a stick and running around to different safe zones like a grown-up game of tag?

Three-time table hockey champion Lou Marinoff has given much thought to these very questions. As a philosopher and author, it’s difficult for him not to ruminate at length on society’s indifference to these outsider sports — why it is that the very that you’ve been chosen to do — that you excel at — is kicked to the curb, or even worse, ignored. And what to do about it.

We spoke at length to Mr. Marinoff about these and many other issues.

WOTP: What are the differences between air hockey and table hockey?

LOU:  There are many differences between table hockey and air hockey, although they are related to the same pure form, as Plato would have it: the form of hockey.  The whole idea is that you have a game with boundaries and you try to put a puck into a net. How many players you have, what kind of puck you have exactly, whether you hit the puck with a stick or with some kind of a knob depends naturally on the kind of game you’re playing, but it’s all related to hockey.

Lou on the prowl

The main thing is: With table hockey you have a team of players, which makes it look like ice hockey in miniature. You generally have a goalie and defensemen and wings, and you have the capacity to move, pass the puck back and forth. And generally one of these players will do the scoring.

In air hockey you have to do it all. You have one player who is basically controlling offense and defense together, very quickly. The transitions are very fast. And so the game is much faster. There are fewer possibilities in terms of who you are going to pass the puck to. There’s no one to pass the puck to, but you have to make a play off the boards or make a great defensive play, so there are similarities and differences, but it’s based on the same concept.

WOTP: Why does this appeal to you? 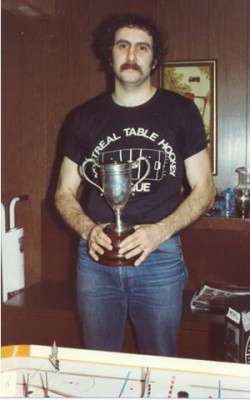 To the exhausted victor go the spoils!

LOU: There are a lot of reasons why this is interesting to me as a philosopher and as an educator, and the first one has nothing to do with hockey. It has to do with a bigger facet of the human being, and that is games and play. We are not the only animal that plays. The other primates play a bit—otters play, dogs and cats play occasionally—but human beings have taken and evolved the concept of games and play to a really high level and a lot of our lives are consumed with playing.

Playing is very important to children for their development and play is important for adults, one way or another, whether it’s games or sports. Most of us end up playing something on a lifelong basis. Music is play. That verb “play” applies to a lot of facets of human existence, so it’s obviously something important for our species. And then the question is, where do you grow up, what part of the world are you from geopolitically, so what are you going to be exposed to when you’re young, in terms of games?  Hockey? This is a game more for the northern latitudes and kids grow up with great passion for it, whether it’s table hockey, ice hockey, field hockey, air hockey, it’s all part of the same great game.

WOTP: But is it always play? Or is it something else?

LOU: Philosophically this is interesting: What is a game doing? When we play a game, basically we engage simultaneously between competition and cooperation. We need to compete with each other because often competition brings out the best in a human being. You discover your excellence sometimes only when you’re under pressure, when you really have to come up with a great play, you know, come up with the goods! That’s what spectators come to games for, right? They want to see the athletes performing at a high level. So competition drives us achieve our best in terms of performance. But we also have to cooperate. Table hockey, air hockey, ice hockey—these games teach sportsmanship because you need the other person to compete. You go out there by yourself and you don’t have a game. You can go out there and skate around or just move the puck around, but you actually need another person to compete! 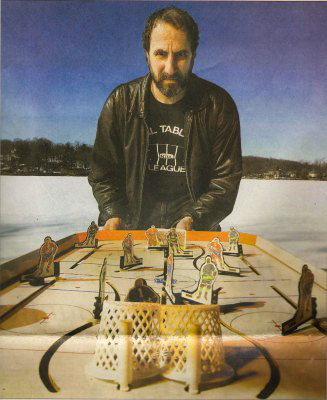 Toy? Game? Sport? Or something larger?

WOTP: I guess what I’m getting at is, well, is there some kind of line between game and sport and where do you draw that line?

LOU: Really it has a lot to do with the medium in which this game is being enjoyed and witnessed and are being transported. If you ask the manufacturers what they are selling, very often they don’t even think it’s a game… they think it’s a toy. Table hockey had this problem for a long time. The people who made it were toy manufacturers, and only understood toys.

Then when they say, “Hey wait a minute, grown men are taking this seriously, okay it must be a game. It’s got this competitive edge; there’s a lot of sophistication in it.” As in air hockey, I’m sure, there are very sophisticated plays that can be made and so forth.

So it looks like a game. But what happens to the top players when people get really good at this game? They find other people who are also really good and have achieved a great level of play, and then they want to compete seriously. At that point it’s sport. At that point it starts to taste like a sport. It’s not just a game anymore.

But it is a little different with air hockey and table hockey. Why don’t we look at pro football players, hockey, soccer, and say: “You’re playing a kid’s game, what’s wrong with you?” Of course they’re playing a kids game! The only way you could ever get to be a professional is to start early enough in life and get the muscular memory going—get the techniques into your immature neurological systems—so as you develop into a human being you have those skills!

WOTP: Do you ultimately think there is something rebellious about mastering an antiquated table game like this? 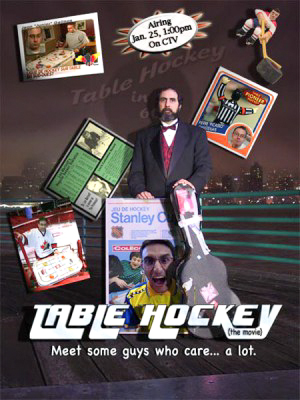 LOU: Well, the car was invented a while ago and it’s still with us. If you look at tennis racquets and baseball bats and footballs and soccer balls… there are a lot of things that were invented decades ago—maybe centuries ago—that are still with us! So I wouldn’t be too prepared to dismiss something just on the basis of its antiquity!

Sports evolve, however, and I think the point that you make that is really interesting, is to look at the contrast between computer games and virtual games and real games. I’m claiming that one of the strengths of air hockey and table hockey is that they are real and not virtual. I think people want more reality than what they are getting.

Ultimately, you can look at a game like Nintendo, which captured worldwide a generation of children. It was a universal language, actually, for children. They could all get together and play Nintendo. Whether it’s Sega or Gamecube or whatever, the fact of the matter is that these are virtual and not real. The action is taking place on a computer screen, not in a three-dimensional space-time setting and the skill set you need—however adroit these people are at manipulating the control pads—it’s not the same kind of hand/eye coordination you need in reality!

So table hockey and air hockey both belong to a class of games that are played in space-time, 3d, with a real opponent standing on the other end of the table. And there is something there that is irreplaceable. 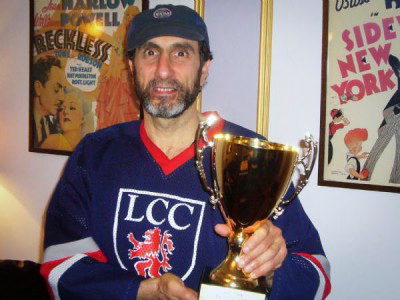 The Comeback Kid of table hockey!

We are human beings. As such we need to function in real terms as well as in virtual ones. And if you start asking people, “Which is better: e-mail or real mail?” Well, they’ll tell you e-mail’s faster, it’s cheaper, it’s instantaneous, we can communicate around the world and all that, but you know what, people should never forget about the satisfaction of writing a letter to somebody… and getting a letter from somebody. That’s something that you really keep and can cherish and reread and has a certain kind of value. I know that the visual tradition has unfortunately supplanted the written one, but people still need to appreciate the virtues of reality and if they can’t do it with literature and letters and stuff, because the e-thing is really what’s happening, they have to do it with sport!

And there is a certain satisfaction to scoring a goal in the real world that you will never be able to replicate in virtual terms!

Lou Marinoff is the author of many bestselling books, including The Middle Way, Therapy For the Sane, and Plato Not Prozac. His many areas of professional and personal interest are showcased at his website: http://www.loumarinoff.com/.