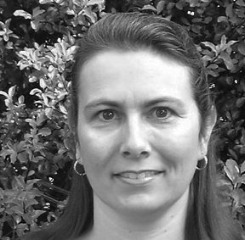 Kara Adema (formerly Klyn) was the most dominant air hockey women’s champion in the 1990s. But she wears that crown with kind of a dubious pride, and for many years campaigned against the need for gender specific rankings. For her there was always only one true world ranking: the one that was obtained against all of the testosterone in the room.  Although she has been retired from air hockey for the past decade, she was a permanent fixture during the middle third of its history.

We feel very lucky to have tracked down the legendary Kara Klyn for this article! We asked her to talk about her most memorable air hockey moment, and this is what she said:

All air hockey players remember the table that got them hooked. I was 19 and it was 1989 in a shaggy little arcade in Fremont, California called Galaxy. They had ten shiny-new Tornado foosball tables and one Dynamo brown top. I could never beat any of the guys in foosball. But on the air hockey table—that was a different story. 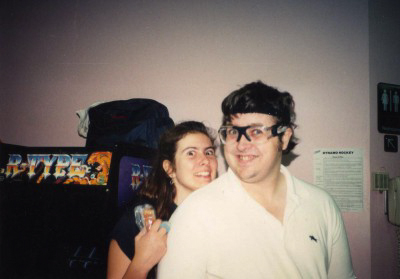 Kara and the puckish Paul Marshall

Somehow, a flyer for an air hockey tournament in Mountain View—about 20 miles away—made it to Galaxy. They guy behind the counter there was excited to show it to me. A few weeks later I found myself at the California State Championships with some of the best players in the world. I had no idea air hockey could be that competitive, or that amazing. That first moment seeing professional play I was so intimidated I wanted to fade into the background and just be one of the girls that just looks on. But the look on my face gave me away. I wanted to play like them. And they wanted me to learn. Even though I was thoroughly defeated in that tournament, I won friends there that I would play against, and travel, promote, and experience random adventures in life with for the next several years.

By the time the early 90s came around I was working with Mark Robbins and Tim Weissman and was fully entrenched in promoting the sport in California, and occasionally around the country. I was learning the art of organizing major tournaments and building up prizes. I loved traveling and meeting new players. I had won a couple of women’s championships at that point and while having that title was very cool, my overall ranking was for me, personally, disappointing. Even if it was considered “good” for a female player. But it so happened that my best air hockey moment happened that same year in Littleton at a Colorado state tournament. 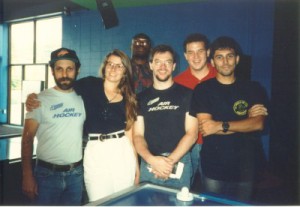 Mark Robbins, Kara, Tim Weissman, Don James, and the late Owen Giraldo. Anybody know who the guy in back is?

I was a hippy at heart then and I felt like I just fit right in with all the friendly people and the beautiful country. Being short on cash in those days I stayed with local players. I thought it was cool that the Colorado players that had been around the air hockey table a few times had a Brunswick table in their living room. Mark showed me “The Barn” filled with Brunswick tables. And by helping Mark with a few odd jobs around his place (and there are plenty of opportunities there;), one might luck out and score a Brunswick mallet, a devastating Berger puck, or some other interesting piece of air hockey history he has buried there.

But my best moment happened in a little sunken arcade within a giant indoor entertainment center. Spirits among the players was high that weekend. There was fresh snow (which was a treat for the Californians and Texans), great friends, a new laser tag gallery which we had passes to, and some truly great angles to video tape play from above the arcade pit. 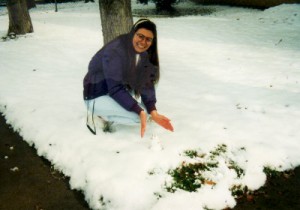 Kara constructs the tiniest snowman in the universe.

While all tournaments are fun and intensely competitive, this one had a little extra undertone of fun infused in it. I went in the losers bracket my second or third match. Then something happened. I don’t know if I just stopped worrying about when I would lose and let my instincts take over, or if I found a new confidence from within. But I just kept on winning my matches. I rose above all but seven other players that weekend in the main bracket. I remember watching a video tape of that final match thinking…”Is that me playing?”

It’s been almost 20 years, since then and I think it was the highest finish ever by a woman. I didn’t even realize that at the moment. Does it still stand? I don’t know. I have won seven women’s titles against some very tough women (Andy Yevish and some others may say six titles, but that’s another story itself). But placing eighth in the main bracket was by far, my best air hockey moment. 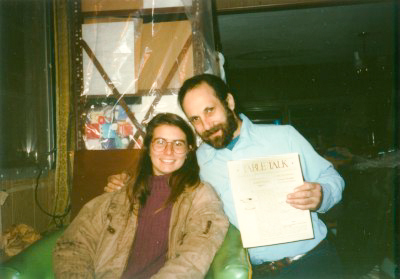 Editor’s note: In a future installment Kara will break down her personal vendetta against the notion of holding women’s tournaments in air hockey. Looking forward to it, Kara!

Kara met her future husband Mike in 1991 and became one of the first functioning air hockey couples. They were married in 1999 and now have a beautiful daughter. Although Kara’s been out of air hockey for a while—in order to concentrate on school, career, and family—she and Mike still play each other on an old Brunswick, next to that Mustang (the other classic) in the garage.

Her portfolio and design work can be seen at: http://www.karaadema.com/